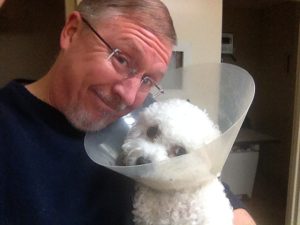 Dr. Kevin Cummins is joining our staff after about 20 years at Jericho Animal Hospital in Jericho New York. We are thrilled to have him join our team! He brings a smiling face and so much expertise. He will be seeing cases Tuesday through Fridays.

A Long Island native, Dr. Cummins began his career in veterinary medicine at age 15 working for a high quality multi- doctor veterinary hospital in Huntington during high school and college. His college education began at Stony Brook during the day and Farmingdale at night taking animal science classes. He transferred to Texas A&M University and earned 2 Bachelor of Science degrees from the department of Animal Science in 1982.

Upon graduation from veterinary school he has spent the majority of his career at Jericho Animal Hospital in Syosset both as an associate veterinarian and partner in the practice.
Dr. Cummins enjoy all aspects of small animal veterinary medicine. When possible he integrates alterative therapies into practice. He supports animal rescue and assistance animals, in particular Canine Companions and the Guide Dog Foundation.

Request Your Appointment Now
Call Us Text Us
Skip to content